The foreign exchange rate is the value or price of a currency expressed in terms of another currency. For example, £1 = $1.2
This exchange rate will be used when these countries trade and need to convert money. So if a person were to convert £100 into dollars, he would get $120 (100 * 1.2).

The foreign exchange rate of each currency is determined by the market demand and supply of the currency. 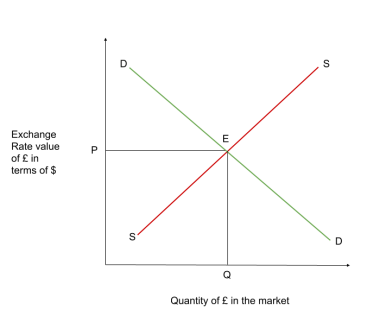 This is an exchange rate that is determined freely by market demand and supply conditions, and so will fluctuate regularly.

The rise in the value of one currency against others, on a floating exchange rate is known as appreciation of the currency’s exchange rate.

The fall in the value of one currency against others, on a floating exchange rate is known as depreciation of the currency’s exchange rate

Click here to go back to the Economics menu

What Do You Think? Cancel reply

This site uses Akismet to reduce spam. Learn how your comment data is processed.

Check out our friend Iman's site where she'll help you with AS Level English language (9093). Bookmark this site to your browser so you can use it for your AS Levels!
Advertisements