B8.3 – Sexual Reproduction in Humans

Disclaimer: Due to unforeseen difficulties, we have had to take down the images on this notes page. They will be replaced shortly. We apologise for the inconvenience, but hope that the new images will provide you with an even better learning experience.

The vas deferens is the sperm duct. Also, testis is singular, while testes is plural. 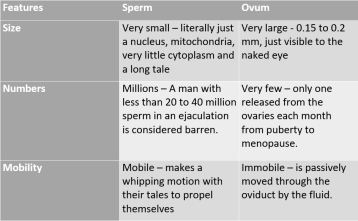 The menstrual cycle is a hormone-regulated cycle.  On average, it lasts 28 – 35 days. It should also be noted that inside each ovary contains numerous follicle.

A follicle is a fluid-filled sac that contains an oocyte (an immature egg).

There are two main phases of each menstrual cycle: The follicular phase – which lasts approximately 2 weeks, and the luteal phase, which lasts another two weeks.

Menstruation marks the beginning of each cycle, and thus, the first part of the follicular phase. This is when the endometrium lining sheds. If you’re a girl who’s hit puberty, you’ll know that this is the messiest part.

Washing out blood stains is absolute torture, and don’t even get me started on the cramps.

You don’t need to know this, but those cramps are caused by muscle contractions – similar to the ones you experience during labour, but usually much less intense.

How long the menstrual phase lasts varies from girl to girl – it spans 3 to 9 days, depending on the person.

During menstruation, follicles start to develop, and along with them, the oocytes they carry. The Endometrium lining starts getting repaired. The dominant follicle – i.e. the one that will release the egg in ovulation, will only finish developing after the end of menstruation.

Next is Ovulation. This marks the transition from the follicular phase to the luteal phase. In ovulation, the dominant follicle bursts and turns into a corpus luteum, and the oocyte is released into the oviduct. The luteal phase has begun.

The hormones produced by the corpus luteum ensure that the thickness of the endometrium is maintained.

If the egg is fertilised while in the oviduct, it will form a zygote, which then forms an embryo, a foetus, and finally, a baby. The uterus wall (endometrium) thickness will be maintained until birth.

This causes menstruation and marks the start of the next cycle.

During sexual intercourse, an erect penis is inserted into the vagina.

Semen is then ejaculated, and millions of sperm are released into the neck of the vagina. Out of these millions, numerous sperm will find the egg – as shown in the animated picture above the sperm vs. ovum table – but only one will penetrate.

A fertilisation membrane is secreted around the egg once one sperm penetrates, preventing the penetration of numerous sperm.

Finally, the sperm nucleus and egg nucleus fuse to form a zygote. This is fertilisation.

First, ovulation – a mature follicle bursts, releasing an egg into the oviduct.

While in the oviduct, fertilisation occurs and the oocyte develops into an ovum. The fertilisation causes the formation of the zygote. The zygote then undergoes cellular division.

It divides into two cells, then four, then eight and so on.

After a few hours, a ball is formed.

The cells in the ball, which is now called an embryo, carry on dividing as it travels down the oviduct.

Once the embryo reaches the uterus, it sinks into the soft lining of the uterus – this is implantation. By this stage, the placenta will have begun to form.

This is a picture of the amniotic sac and fluid. The amniotic sac is the thin membrane (which is formed from cells of the embryo). You can also see the human embryo, at 7-8 weeks.

The white cord extending from approximately the baby’s belly button towards the red mass is the umbilical cord. The red mass is a portion of the placenta. The fluid that the embryo is suspended in is called the amniotic fluid.

Just to give you guys an idea of the positioning of the amniotic sac, I’ve included this diagram. Note that in normal pregnancy, foetuses and babies will change position several times but should always be upside down for the last stages and during birth.

The function of amniotic fluid is supporting the foetus and protecting it from physical damage. It also absorbs excretory materials (urine) release by the foetus.

This is very important because the foetus may have a different blood group to the mother, and mixing blood groups will cause blood clotting. Also, the mother’s blood pressure is much higher, and this could damage the foetal organs.

The proximity of the maternal and foetal blood allow substances from one’s blood to diffuse across into the other’s blood. 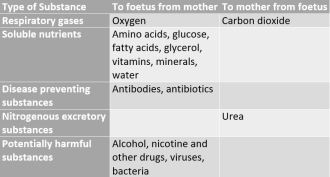 The disadvantages of bottle-feeding are basically all the negative of the advantages of breastfeeding (it doesn’t contain antibiotics, there are additives and preservatives, etc.)

The disadvantages of breastfeeding are the negative of the advantages of bottle feeding (no one else can feed the baby, the father can’t bond, etc.)

Note that HIV is primarily spread through the transfer of body fluids.

Methods of preventing the spread of HIV/ AID:

There is a certain type of white blood cell called lymphocytes present in the bloodstream. Thes produce antibodies.

The HIV virus attacks a certain type of lymphocyte, so these antibodies are no longer produced. The immune system is weakened, and thus the person develops AIDS (Acquired Immune Deficiency Syndrome). This makes the person become more vulnerable to infections such as pneumonia, tuberculosis, etc. These diseases that arise because of this person’s weakened immune system are called ‘opportunistic diseases’.

Someone with AIDS usually dies of a collection of opportunistic diseases.

Click here to go back to the Science menu.

Check out our friend Iman's site where she'll help you with AS Level English language (9093). Bookmark this site to your browser so you can use it for your AS Levels!