Living organisms are made of cells.

Study the diagram – it has everything you need to know regarding this point.

Nucleus: a double membraned organelle containing the cell’s DNA. DNA regulates the cell’s activities, making the nucleus the ‘control centre’ of the cell.

The cell membrane is a double-layered membrane that surrounds the cell.

Cytoplasm is a clear, jelly-like substance.

Chloroplast is a cell organelle that is basically a double membranous structure (a structure with two layers of membranes) containing chlorophyll. Chlorophyll is a green pigmented structure that converts light energy into chemical potential energy – in other words, it uses energy from the sun to create carbohydrates, that can later be chemically broken down to release energy for the cell.

This is an example of what you might see when you look at plant cells through a light microscope. You can’t see the cell surface membrane and cell wall as separate structures because they’re too close together for us to differentiate – you’ll need an electron microscope for that (a much more powerful type of microscope) – but the line around the edges of each cell is thicker because of the cell wall. The black dot in each cell is the nucleus. At some resolutions, you can make out the vacuole (you know it’s a vacuole because you’ll see the tonoplast. The tonoplast is the membrane of the vacuole.) The blackened cells in this image are damaged cells.

The best way to know that it’s plant cells you are looking at is to observe the tight arrangement of cells, the cell walls on the cells, and the regularity of their shape – animal cell shapes are much more regular.

Note, plant cell walls are made of cellulose, a type of sugar.

Zoomed out, they look like that. Notice how irregular they are compared to plant cells. 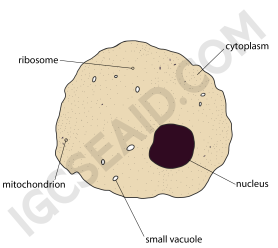 Nucleus: this ‘organelle’ has two primary functions – it stores the cell’s genetic material (DNA) and coordinates the cell’s processes, including growth, some reactions that occur in the cell, protein synthesis, and reproduction (cell division).

Cell wall: This is a cellulose layer that surrounds the plant cell. It gives the cell structure and shape and prevents the plant cell from bursting when it absorbs a lot of water. It is fully permeable.

Chloroplasts: a cell organelle that is basically a double membranous structure (a structure with two layers of membranes) containing chlorophyll. Chlorophyll is a green pigmented structure that converts light energy into chemical potential energy – in other words, it uses energy from the sun to create carbohydrates, that can later be chemically broken down to release energy for the cell.

Vacuoles: Vacuoles act as a store for nutrients and waste matter, and keep their contents separate from the cell cytoplasm. They also store water, and when they have lots of water, they push outwards on the cell, providing support and helping the cell become rigid. 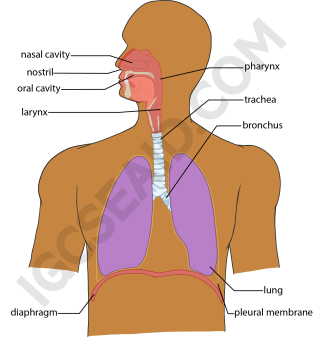 These cells line your trachea and bronchi in your airways (shown right).

They’re also found in the fallopian tubes and in the uterus (you’ll learn about these later when we get to reproduction).

These cells have tiny hair-like structures that emerge from one side of the cell. These hair-like structures, known as cilia, move back and forth simultaneously, like a wave, essentially beating the mucus up and out of the respiratory tract into our throat, where we can swallow it into our digestive system. Anything dangerous is then killed by the concentrated hydrochloric acid in our stomach. If you’re having trouble visualising the movement of cilia, here’s a video: https://www.youtube.com/watch?v=miEEluVlemQ

But yeah, the structure of ciliated cells (the cilia they possess) allow them to carry out their function (moving mucus out of the respiratory tract). 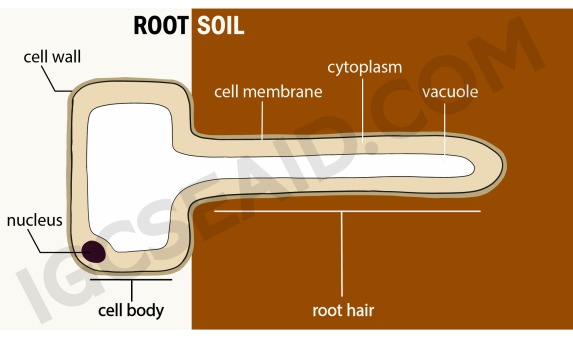 The diagram shows a section of a leaf and the cells that make it up.

Red blood cells or RBCs are found in the blood. They contain millions of haemoglobins, the pigment that makes them red. Haemoglobin is a protein structure that contains iron (haem means iron), and oxygen binds to this iron. One haemoglobin can carry up to four molecules of oxygen. This makes RBCs very good at carrying lots of oxygen.

RBCs are very small (about 7 μm in diameter – that’s seven-thousandths of a millimetre), allowing them to travel in the smallest blood capillaries so that they can be brought as close to oxygen needy cells as possible.

RBCs also have a ‘biconcave disc shape’ – that’s the shape shown in the diagram. It means they have a disc shape, except it dips inwards on both sides, increasing the surface area of the cell, allowing oxygen to diffuse in faster.

They can also be ‘squished’ slightly (I think the proper way to say this is ‘they can be slightly elastically deformed’) to travel through capillaries more easily.

The ovum is a female sex cell. Its job is to fuse with a male sex cell to form a zygote that will eventually develop into a full organism. Note: sex cells are also known as gametes.

Our sex cells, however, only have one set of chromosomes – their ploidy number is 1n or n, and they can be described as haploid cells. This means, in humans, sex cells only have 23 chromosomes each. This is important because when two sex cells fuse, the resulting zygote should have the correct number of chromosomes. E.g. in humans, when an ovum is fertilised by a sperm, and their nuclei fuse, the resulting zygote will have 46 chromosomes (23 from the egg cell and 23 from the sperm). If sex cells did not have half the chromosomes of somatic cells, then every time a zygote is made, they will have twice the chromosome number of their parent organism, resulting in an entirely different organism altogether!

Fun fact: the ovum is the largest human cell – it’s the only one you can see with your naked eye and is about the same size as the full stop at the end of this sentence. The main thing that makes it so big is the layers of padding it has, all to protect the information contained in the nucleus – the DNA.

Around the outside of the cell is a layer of different cells – the follicular cells. They form the corona radiata (I don’t think you’ll have to learn this name for your exams). They provide support and nourishment to the ovum.

Surrounding the ovum is the jelly coat (marked in the diagram as zona pellucida). This acts as a barrier to sperm – once one sperm has burrowed its way through the zona pellucida and successfully fertilised the egg, a chain of reactions are set off, which ultimately make the jelly coat impermeable to any more sperm, stopping multiple sperm from fertilising the same egg.

The cytoplasm, also known as the yolk, contains nutrients to provide to the growing zygote, once the egg cell is fertilised.

Note: In an exam, the most important parts you’ll need to remember in relation to the structure and function of the ovum is what I’ve written about its chromosome number, its cytoplasm, and its jelly coat. 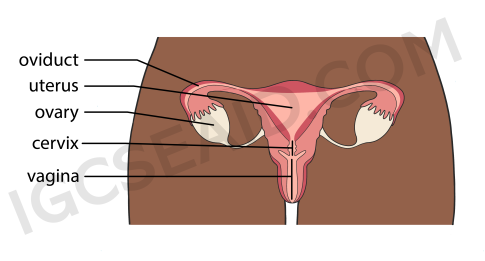 These are the male gametes/ sex cells in humans. During sexual intercourse, they are ejaculated, in a solution called semen, into the vagina. From there, they must swim all the way through the cervix, through the uterus, and into the fallopian tube, where the ovum should be located. There is, however, a catch – the ovum will only be there after the female has ovulated, that is, released the ovum from the ovary. This happens about halfway through the menstrual cycle (approximately 14 days before a female menstruates/ goes on her period).

This is a pretty long distance for such a small cell, so it requires a number of adaptations to fulfil its role in fertilising an ovum: 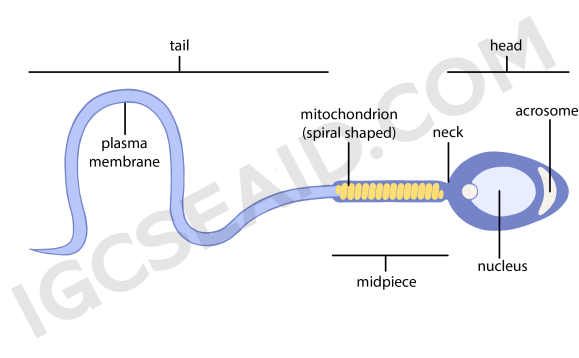 At the IGCSE level, though, you’ll only need to watch up until 4:07 (the part where the sperm fuses with the egg) – the rest of the video deals with matter you’ll learn about in A level biology.

This is the formula connecting magnification, image size, and actual size.

In words, it is

If you measure the diameter of one of those cells on the image to be 7mm, then measure the actual diameter of the cell to be 7μm, you need to first convert the readings to the same unit.

If you want to calculate the actual size of something using the image size and magnification, however, you’ll need to rearrange the formula to make A the subject:

The syllabus is asking you to use millimetres as units, so when you measure the image size, make sure you measure it in mm. Then substitute the respective values and calculate A.

In this situation, they’ve given you a line to measure the diameter of the RBC along, and a line to figure out the magnification (the scale) of the image with (along the bottom).

Your first step should be measuring the line at the bottom. Let’s imagine it measures 20 mm. We know that if this image was shrunk down to meet the actual size of the cells in the image, that line would only measure 3.5 μm, because 3.5 μm is written next to the line. This means that the A of the line is 3.5 μm.

We now have the Magnification of the image.

Next, we want to calculate the actual size of the RBC in the image.

So, measure the diameter along the diagonal white line. Let’s pretend this measures 40 mm.

Notes and illustrations by Sarah.

Click here to go back to the Science menu.

Check out our friend Iman's site where she'll help you with AS Level English language (9093). Bookmark this site to your browser so you can use it for your AS Levels!